Bingo – entertainment for anyone

We kindly inform you that Bingo is canceled until further notice.

Thank you for understanding.

Bingo guarantees a fun and relaxed gaming experience. It doesn't require special knowledge and is suitable for beginners. It attracts players of all ages. The goal is to cover all 24 numbers on the card, except for the central number, 25, which is the card's serial number.

Before the final Superbingo session, where all 24 numbers must be covered, the player also takes part in three other sessions - the goal is to cover as soon as possible the numbers on your card, as shown below.

Try your luck in Bingo Jolly!
To make Bingo even more interesting, we introduced new elements. These are:
• progressive Superbingo jackpot increasing after each Bingo game
• Jolly or Double Jolly for a quicker win.

Bingo is a simple game. However, read more about it, so that you will be able to really enjoy it!

Winning combinations in a single draw: 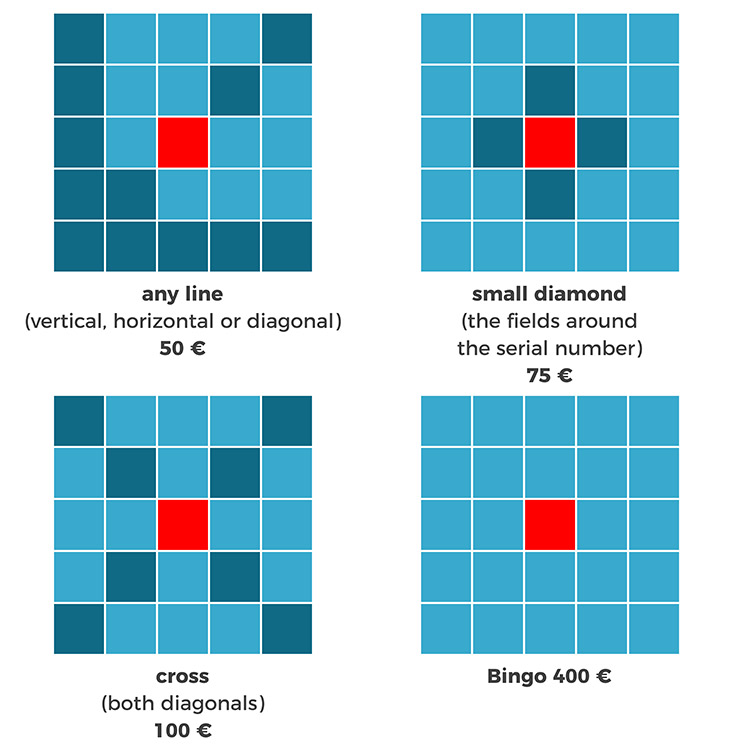 With only one card, the player can take part in four sessions. Superbingo is only possible in the fourth session, however only until the 50th number was drawn.

If after the 50th number has been called no-one has the Superbingo, the game continues until the first player (or players) covers all 24 numbers on his/her bingo card and thus wins € 400. In this case the amount of the progressive Superbingo increases by € 50 after each session, and when Superbingo in awarded, its value returns to the initial € 4,000.

Before the fourth session, one additional Jolly ball is inserted into the raffle drum (containing balls with numbers 1 to 75). This ball replaces any other undrawn number.

Once the Superbingo has reached € 10,000, two Jolly balls are inserted in the drum before the fourth draw.

The first player to cover one of the winning combinations must inform the bingo caller thereof immediately. In case of more winners, the prize shall be split among them equally.

All Hit Universe of Fun centres are open

We reward your loyalty

The operator of Hit d.d. Nova Gorica websites uses cookies for the purposes of ensuring functionality, a customized user experience, security, and smooth functioning of the website. For most effective operation and a best user experience we advise you to accept cookies. Through the use of cookies we will install on your computer also anonymised cookies of our partners, which are used to monitor the general statistics of the website, as well as marketing cookies used to deliver you the most relevant contents. We will not share the personal data collected through this website with third persons. You can read more in our Privacy Policy.

If you agree to the installation of cookies, click “Select all and continue”. If you click “I don’t allow the use of cookies”, the cookies used for statistics, marketing, and consequently a customized user experience shall not be installed. Only the cookies necessary for the page to work shall be installed and your experience may be limited.

We will memorize your decision for a period of 2 years. Cookies settings can be changed any time by clicking the icon in the bottom-right corner.